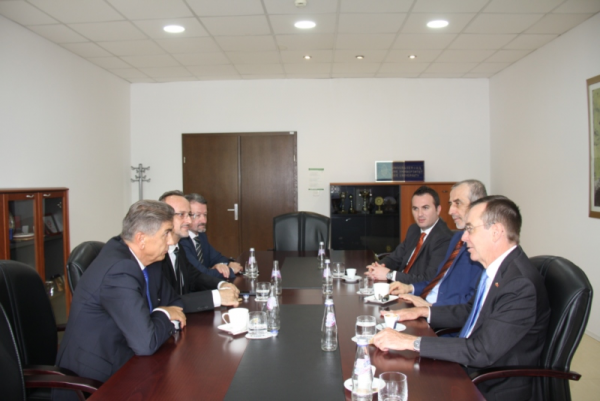 Upon the conclusion of the solemn ceremony, on the occasion of the promotion of the fourteenth generation of South East European University (SEEU) graduates, which was held on Saturday at the SEEU campus in Tetovo, the US Ambassador, H.E. Jess Baily, accompanied by the Slovenian Ambassador H.E. Milan Jazbec and the Minister of Education and Science, Arbën Ademi, met the current SEEU rector, Prof. Dr. Zamir Dika and the Rector-Elect, Academician Abdylmenaf Bexheti.
Rectors Dika and Bexheti were grateful and expressed their appreciation to the United States of America for the great contribution it has given to South East European University. They reconfirmed the ambassador's words about a special US relationship with SEEU, pointing out the contribution of the United States Government through USAID and in partnership with Indiana University since the foundation of SEEU.
Minister Ademi, together with ambassadors Baily and Jazbec, promised to continue support for SEEU, always putting in the first place quality in teaching and in general in the academic and scientific activity of this important institution of higher education in Macedonia.