H.E. Samuel Žbogar, the EU Ambassador, and H.E. Carlo Romeo, the Ambassador of Italy, engaged in discussion with students at South East European University (SEEU) in Tetovo, on Wednesday (20th December 2017), on the occasion of marking the 60th anniversary of the signing of the Treaties of Rome. 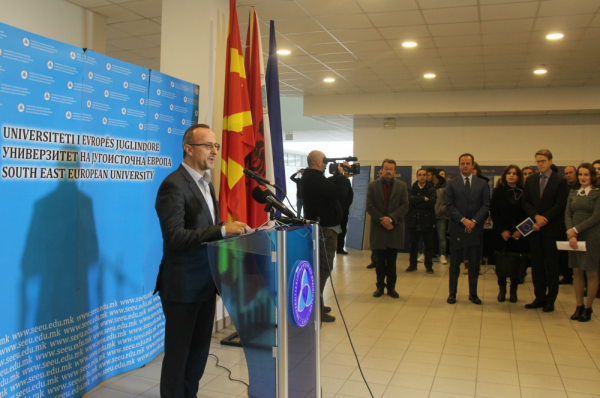 The exhibition had a symbolic title related to the political moment that Macedonia faces in its efforts towards European integration: "Ever Closer Union".

Brussels is helping Macedonia to build a modern democratic state, but also--first and foremost--to boost the country's economy.

“This is a special day because the very name of our University is linked to Europe and to the EU's trends of integration and cooperation with all parties, and in particular with our pro-Western and American orientation," said the Rector of South East European University, Prof. Dr. Zamir Dika.

The EU Ambassador, H.E. Samuel Žbogar, expressed his satisfaction that he is coming back to SEEU and that his message has to do with the continuation of reforms within the framework of Macedonia's Euro-integration.

“The doors of the Union are open, while 2018 represents a single opportunity for each country to make an irreversible move towards Euro-integration," said Žbogar.

The Italian Ambassador H.E. Carlo Romeo said that “Italy will support the aspirations of the Western Balkan countries for integration into the Euro-Atlantic structures.”

The Head of the EU Info Point, Prof. Dr. Dr. Besa Arifi, quoted Ms. Federica Mogherini (European Union High Representative for Foreign Affairs and Security Policy), who said that EU doors are open. She expressed gratitude to the EU Delegation and the Italian Embassy for the realization of the exhibition and their participation in this important event.