Ambassador Kerim delivered a lecture at SEEU on Globalization and Diplomacy

At the South East European University campus in Skopje, the career diplomat and ambassador Dr. Srgjan Kerim delivered a lecture on Diplomacy and Globalization. 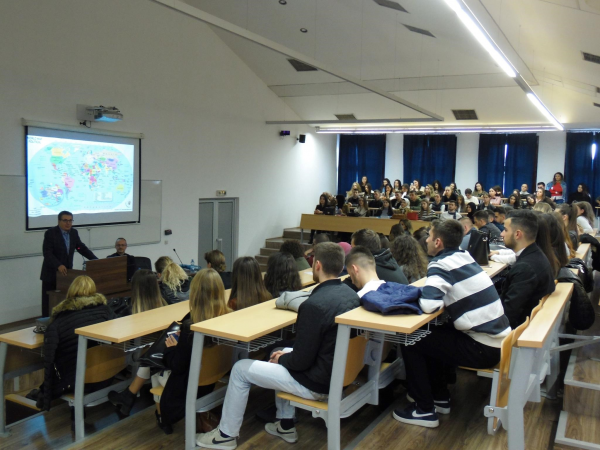 The Rector of the University, Prof. Dr. Zamir Dika, said that he was convinced that this lecture would have a direct impact on students and scholars, particularly those who are research active in the fields of diplomacy, international relations and globalization.

According to Rector Dika, Dr. Kerim comes to SEEU at a time when he can observe consistent scholars addressing his theses and views, which can also be considered as providing a systematic global policy algorithm. “Additionally," said Rector Dika, "this form of discourse and our cooperation with experts in the relevant fields is one of the most practical approaches for creating positive student habits, so that in the future they will put into practice the experiences of these mentors who are models of knowledge."

Dr. Kerim noted that “globalization is a process, not a concept, where an increasingly intense interactivity of economic, social and political factors emerges, causing global events to be local at the same time. Therefore, the future will be in the hands of the new educated generation who will walk in line with global changes. Among these students, it is quite possible that there are future ministers, prime ministers and state presidents who, with their knowledge, will be obliged to remove absurd barriers.”

In the end Rector Dika thanked Dr. Kerim for donating his personal library to SEEU. There are 635 book titles of substantial value from different fields and languages, dominated by books in English, German, Croatian, Albanian, Macedonian and Serbian, and covering the fields of literature, philosophy, diplomacy, sociology and rare atlases and encyclopedias. There can be no doubt that this generous donation is important for the University Library because, besides enriching it, it also brings a new quality through this library collection which, thanks to Ambassador Kerim, has found shelter under the roof of our University.