Debate on decentralization in SEEU 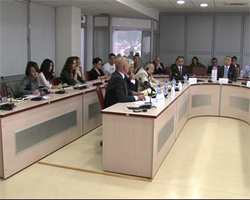 "Repercussions of the process of decentralization of municipalities nine years after signing the Ohrid Framework Agreement" was the topic of the conference which was held on Tuesday (28 September 2010), in SEEU under the organization of the Institute for Democracy and Development.
Main speakers at this conference were: the heads of several municipalities in Macedonia, government representatives and experts in the field of local government.
"The process of decentralization is one of the main pillars of the Ohrid Framework Agreement. The contribution of government, local government, NGOs and civil sector is very important in this process, "said Deputy Prime Minister of Macedonia Abdylaqim Ademi.
Some of the mayors that participated in the conference said that the decentralization process has stagnated.
"We must openly say that all activities and capital investments in local institutions are under the jurisdiction of the government, which means that the government decides for the investment in the water supply and sanitation in the school sports halls, in the streets, etc. and in this case, municipalities are completely in a passive position. Municipalities have no jurisdiction over land ownership and forest management, of the water, pastures, "said the mayor of Gostivar, Rufi Osmani.
Mayors of Kisela Voda, Ohrid, Zelino, Aracinovo, a representative of the municipality of Tetovo and former Minister of Local Government, Xhemali Saiti referred to the problems that local government is facing. The participants emphasized the need for cooperation between local and central government.
Institute for Democracy and Development is constantly organizing various conferences attended by famous personalities.