The Rector of the South East European University, Academician Alajdin Abazi, visited the University “Pavarësia” in Vlora, Albania, on Friday (March 26 2010). Rector Abazi and his homologue Prof. Dr. Arta Musaraj, with their mutual visits in Tetovo and Vlora, have given a new dimension to a relationship of mutual cooperation by demonstrating the importance of academic-scientific cooperation at the university level. 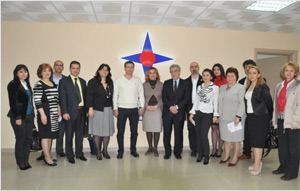 The President of the University “Pavarësia,” Ardian Zykaj, evaluated the presence of SEEU as extremely important for the Balkan university area.  “South East European University in Macedonia, undoubtedly is a model of success,” said Rector Abazi, who beside the presentation of SEEU and the major project of SEEU in Skopje that makes SEEU one of the most important universities in the Balkans, not only for its extension, but also for the quality that the university bears today, delivered a lecture in front of a large auditorium of Vlora’s students and intellectuals in the Aula Magna of the University “Pavarësia,” entitled “Globalisation, Internationalisation and Regionalisation – Trends in Higher Education, the case of the South East European University.” The visit of Academician Abazi to the University “Pavarësia” was accompanied by an extraordinary media interest. Printed and electronic media have given a central place to this activity not only for the fact that Prof. Abazi is Rector of one of the key universities in Macedonia, but also due to the fact that he represents one of two Albanian Academicians, who are included in the working team for the new Encyclopaedia of the Republic of Macedonia. Besides the coverage of the visit made in the University “Pavarësia,” TV media such as: Vlora Channel, TV Amantia, Vlora 6+1 e Fokus TV, exclusively interviewed Academician Abazi, TV Vlora Channel, fully transmitted the lecture of Rector Abazi