‘20 years production of knowledge’, was the topic of the meeting of the Rector of the South East European University, Acad. Prof. Dr. Abdylmenaf Bexheti with students organized by the Student Parliament and Association which was realized on Monday (November 15, 2021). 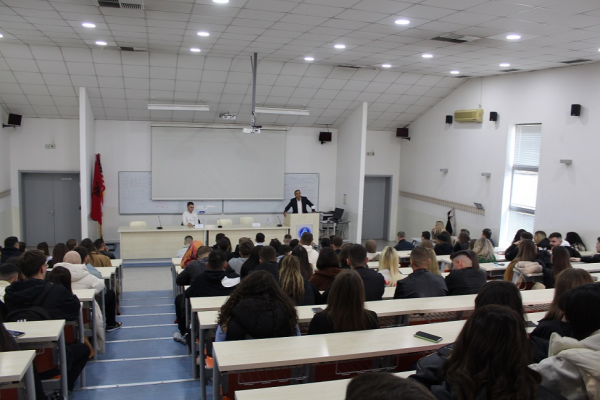 The President of the Student Parliament and Association, Agron Demiri, said that this meeting has its own jubilee symbolism for students directly from the Rector to hear about the journey of the University for these 20 years and future plans.

The Rector of the South East European University, Academician Bexheti, expressed his excitement over the enthusiasm of the students and their presence in such a large number at this meeting.

“It was a group of international and local visionaries, and I was among them, since November 2001, a month, which coincides with the main national holidays, we started the path of building this institution, which is now considered by all as the largest producer of intellectual values", said Rector Bexheti.

He presented the main stages that the University has gone through, emphasizing the great impact it has had these 20 years, especially in the reform of Albanian society here in Northern Macedonia.

“South East European University has created an intellectual emancipation, taking us out of professional, academic, scientific but also social inferiority. The Albanian professional and intellectual elite already bears the stamp of this University. If you look at the structure of employees in the country, but also in Kosovo, you will see that a large part in the elite sectors, such as finance, or services, business as well, their Alma Mater is SEEU”, noted among others Rector Bexheti.

Regarding the future, Rector Bexheti, announced the initiative to create the Faculty of Health Sciences, if everything goes according to plan it is expected to be implemented in the new academic year.

The meeting of students with the Rector was the first activity, within the University Anniversary Week, when a series of activities will be held, which will culminate with the main event that will be held on Friday (November 19), the Solemn Ceremony and Promotion of Doctor Honoris Causa. Also today, the Futsal Tournament with high school students started.

On Tuesday, a Meeting with the University Alumni will be held, while on Wednesday, the International Students' Day event will be held at SEEU, where, among other things, culinary specialties from the country from which the students come will be presented. On Thursday, all employees who have completed 20 years of work at the University will be awarded, while on the same day will be promoted doctors of science who have graduated in the period 2020-21.