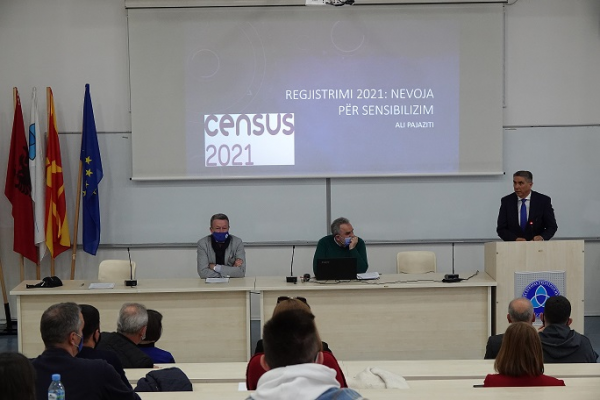 The organization of this debate was in function to raise the awareness of citizens to participate in the census in the most organized and massive way.

The debate was organized on the initiative of the SEEU Rector, Acad. Prof. Dr. Abdylmenaf Bexheti, who gave an introductory speech and spoke about the registration as an extremely important process.

"I am deeply convinced that this process cannot be just a technical operation, as it produces legal and constitutional effects", said Rector Bexheti.

Regarding the activities that are currently being undertaken for the implementation of the census process, Rector Bexheti, spoke in the capacity of Deputy Chairman of the State Census Commission of 2011. He made a comparison of the previous Census law and the current Census Law and highlights two key moments.

“In the Law of 2011 there were two main arguable aspects: ambiguity regarding the registration of the Diaspora, as well as interethnic trust and towards institutions was at a very low level. I am not saying that now there is more confidence, but with the new law protection mechanisms have been created, such as the signing mechanism concluded between the director and deputy-director of the State Statistical Office, whereas in the previous law the Albanian representatives did not have the right of veto. To damage the process it takes very little, but to carry out the process with credibility, it takes a lot of work from all stakeholders, so we organize this debate to raise awareness”, said the Rector Bexheti.

Regarding the challenges of registration, Rector Bexheti drew attention to the registration of internal migration and the possibility of double registration.

Prof. Dr. Ali Pajaziti, spoke about the social aspect of the census, which is taking place in the context of a divided or fragile society.

"There is a fierce war for numbers in the Balkans, therefore it is our national obligation to register and to call on our relatives and acquaintances to register massively and to verify our presence" said Prof. Pajaziti.

Prof. Dr. Jeton Shasivari, said that by organizing this debate, we as a University prove that we are where social processes take place.

“The current Census Law has a more advanced legal basis than that of 2011”, noted Prof. Shasivari.

In capacity of a communication expert Prof. Dr. Demush Bajrami, spoke about the aspect of sending reliable information to citizens, so that there is no misinformation and disinformation that would harm this process.

“We need to make a wide publicity in the mainstream media and on social networks for the census as a very important and necessary moment for the further developments in the state itself” said Prof. Bajrami.

The debate was also attended by representatives of the Student Parliament and Association, as well as other students who asked questions and gave opinions on the topic.