International Conference on Regional Rivalries and Security of the Western Balkans

From 25 to 27 of September 2017, South East European University, in cooperation with the Peace Building & Human Rights Institute of Columbia University, and the University of Antwerp, organized a conference in Struga entitled “Regional Rivalries and Security of the Western Balkans”. 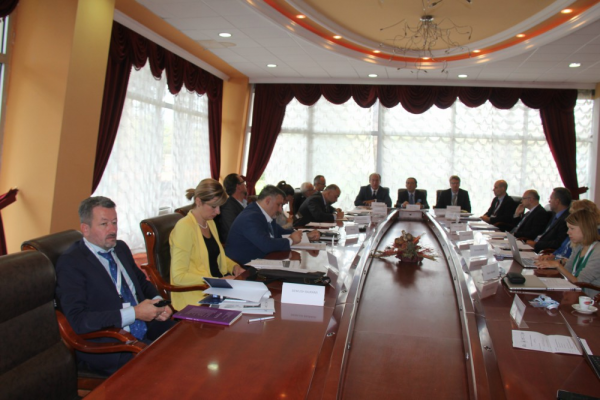 Participating in this conference were well known scholars and experts from Macedonia and the region, and from EU countries and the United States. The conference was opened by the Rector of the South East European University, Prof. Dr. Zamir Dika, who welcomed the participants and expressed his appreciation for the appropriateness of the topic.

The conference was organized in three main panels.

The first panel was focused on the topic “Between unfinished peace and reconciliation and EU and NATO integration”. During this first panel discussion, Dane Taleski, Advisor of the Prime Minister of the Republic of Macedonia for Foreign Affairs; Prof. Dr. Hannes Swoboda, President of the Institute for Peace in Vienna; and Emma Hakalla, from Helsinki University, addressed their topics, and a Skype conference was given by King Paul, from NATO Headquarters.

The last panel discussion was focused on the “Influence of Turkey in the Balkans”. During this panel, Prof. Dr. Dejan Jovic from the University of Zagreb; Prof. Dr. Arlinda Rustemi; and Naim Rashiti from the Balkans Research Group in Prishtina, addressed their topics.

Tom Sauer said that since the Western Balkans want to become integrated, the EU should continue its efforts to integrate them.

Matthew Rhodes said that there are foreign influences over the WB countries, and that efforts should be made to minimize these influences.

Hans Swoboda said that alternatives always exist. He said that there should be a political integration of the WB countries, waiting for improvement. Mr. Swoboda introduced the question: if there was no interest on the EU side to integrate the WB countries, what would happen then? He was in favor of the idea of analyzing the different options and then to present these options to the people.

David Philips said that during the conference objectives were identified like cooperation and integration, saying that these wouldn’t be given for free, but upon merit. This is why there are criteria to be fulfilled. He added that ‘we would like to integrate the WB countries, but they have problems and political issues, like foreign influence, that need to be solved’. Prof. Philips said that this conference should not end here, but that it should be organized in a larger format, and in a European country, addressing these topics in places where they would have a stronger impact.

The final remarks were made by Prof. Dr. Blerim Reka who noted three elements:

-There should be a general consensus that integration is a strategic goal of the WB countries and the region.

-The EU should continue its politics of accession of the WB countries in a serious way, and,

-The WB countries should transform from post-conflict societies to post-corrupted ones.

Prof. Reka added that without structural changes, the WB will not be part of EU.