The high level of air pollution in North Macedonia and in particular in its main cities, such as Skopje, Tetovo and Bitola, have encouraged the academic community of the South East European University, feeling the social responsibility, to take concrete steps in contributing and providing concrete solutions to reduce pollution parameters and increase air quality. 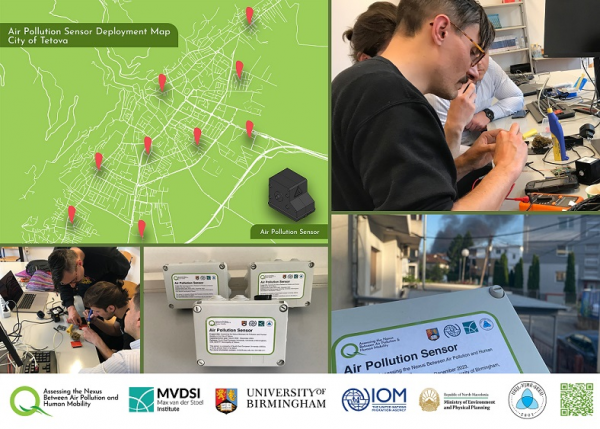 SEEU Max van der Stoel Institute (MVDSI), in collaboration with the University of Birmingham and IOM, are working on a joint project in promoting air quality campaigns and finding concrete solutions, always based on local knowledge and capacity. Within this project, 10 sensors for measuring air quality in Tetovo will be installed. Currently 4 sensors have been installed and in the coming months 6 more sensors will be installed. The locations of the sensors were determined based on consultations with partners and researchers working in the field. Locations with congested traffic, with passive traffic, the city center and the suburbs are some of the places where the sensors will be placed.

The goal is to produce low cost air quality monitors that can be deployed according to identified needs and priorities.

"Sensors collect data on how air pollution changes in urban environments and measure the impact of air pollutants within the city on vulnerable groups. These sensors also help us understand the effectiveness of interventions to improve air quality. Sensors of this type have been used in many countries around the world and their accuracy has been evidenced in many academic publications", says Prof. Dr. Mennan Selimi, project leader.

Skopje, Bitola and Tetovo are reported as among the 10 most polluted cities in Europe in 2017. Poor air quality in North Macedonia also contributes to increased mortality - PM air pollution was the eighth largest factor mortality risk in 2016, associated with 7.3% of deaths in the country.

Partners of this project are the South East European University (MVDSI), the University of Birmingham, the Ministry of Environment and Spatial Planning and the Municipality of Tetova.