On 27th October 2017 the second edition of Public Finances by Academician Abdylmenaf Bexheti, published in September 2017, was promoted at South East European University in the presence of a large number of professors, students and experts of the field. 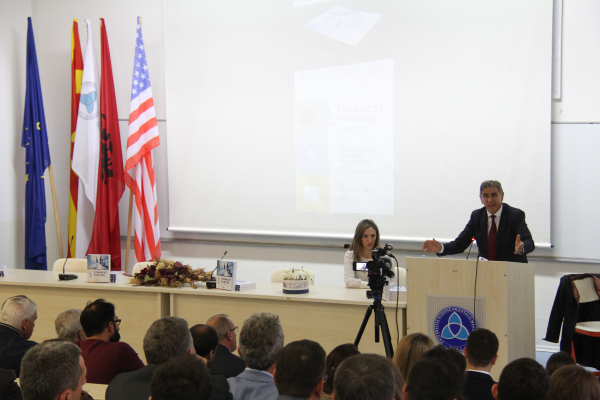 “To follow trends and keep current scientific thinking is a real success,” said the Rector of South East European University, Prof. Dr. Zamir Dika, regarding Bexheti's academic book, whom he described as a co-founder in the establishment and leadership of the University.
The book represents an extraordinary asset in terms of academic performance measurement trends, which is accomplished through scientific research, said Rector Dika.
The Dean of the Faculty of Business and Economics, Prof. Dr. Izet Zeqiri, said that the promotion of this publication testifies to the excellent performance of Academician Bexheti.
“This is a special promotion, of a special book, of a special author” said Dean Izet Zeqiri.
The Rector of University "Luarasi" in Vlora, Prof. Arben Malaj, said that the democratization of knowledge is a positive process, where no one has the monopoly of knowledge and there are already established online classes with 100 thousand students. Our success is to distinguish and get the best. Here is the power and skill of the professor and the researcher. This book proves that it is a good basis for exploring and explaining key moments of public finances.
The author of the book, Academician Abdylmenaf Bexheti, said that: “It is a special pleasure for me to take this opportunity to thank all those who have contributed to my academic career. The order in which I mention them does not mean a ranking by importance because all are important and have given their effort to reach where I am today. My family has always been the motive and impetus for walking and giving professional and scientific input. Special thanks to my late mentor academician Ksente Bogoev, and my colleagues. I want to thank current rector, Zamir Dika, Dean Izet Zeqiri, Academician Abazi and all my students, some of whom now are even distinguished professors. In this edition I have tried to explain the current moments of public finances and challenges faced by governments and the area I have researched.”